On Thursday 7 December 2017 four volunteers from the Brighter Uckfield group spent 45 minutes removing the litter – including a leisure chair! – from behind the platform at Uckfield Railway Station. The photos attached will give you an idea of the mess that confronted the volunteers. Brighter Uckfield will be keeping a close watch on the time it takes for this amount of litter to build up, but it is believed that it is not long. Volunteers have an idea of what might be done to cut down the amount, which tends to accumulate immediately behind the shelters on the platform. By the way, the chair was taken to The Station pub, but it did not belong to them, so it is now providing a place to rest for railway station staff. 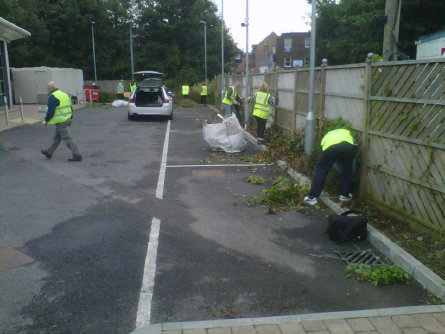 Helped by the Rotary and Waitrose, we have planted up the railway station parking area.